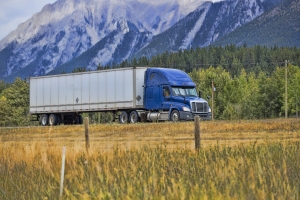 Canada is nearing a cusp of zero COVID-19 deaths since March — a testament to the strict public health rules laid out by officials across the country’s ten provinces since the coronavirus pandemic began grappling the world this spring. With a population of nearly 1.4 million people, Ottawa maintained a low rise of coronavirus cases after barring international visitors, restricting nonessential land travel with the United States, and deploying public safety officials to affected nursing homes.

Now, as officials are beginning to lift restrictions, many fear that Canada’s numbers will rise substantially and mirror the hard-hit U.S. As essential workers, those in Canada’s trucking industry have been heavily dealing with this complex and unparalleled new normal, including navigating strict cross-border travel and changing safety policies.

While not originally intended to go into effect amid a global pandemic, this new approach to North American trade serves as a beacon of hope in the phase of economic recovery that — due to the coronavirus — will continue to be necessary. Earlier this month, truck crossings from the U.S. to Canada reached a level mirroring pre-COVID-19 commercial transportation activity. Transportation officials credited the 4th of July, Canada Day, and the USMCA for this surge in trucking activity.

Canadian truckers and the prospect of cross-border travel

While some numbers are promising, many Canadian truckers remain especially uneasy about cross-border travel between Canada and the U.S.

According to the John Hopkins University of Medicine, daily case numbers in Canada have been trending downward since May, while daily case numbers in the U.S. have been on the rise and trending upward since June. Due to these increasing numbers in the U.S., the Canada-U.S. border will remain closed for nonessential travel through late August. Officials review the closure every month to determine if they need to extend it.

As many Canadian truckers deliver essential goods and services, the border remains open for them. Stuck between job security and their health, some truckers from Canada are expressing uneasiness at the prospect of leaving their more comfortable surroundings to enter a higher-risk country like the U.S.

Canada’s Emergency Wage Subsidy program, which seeks to help businesses impacted by COVID-19 with a 75% subsidy of employee wages for up to 24 weeks, will likely be reaching more trucking companies affected by the pandemic.

The federal government is currently proposing a revamp to the program, as previously only companies with more than a 30% drop in revenue would be eligible. Many trucking companies across the country fell just below that margin. Canadian Trucking Alliance Director of Public Policy and Public Affairs Jonathan Blackham expressed enthusiasm at the proposed modification, as the Canadian Trucking Alliance has been pushing for a more scaled approach to the subsidy.