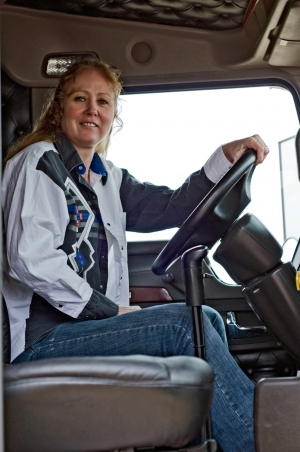 The Promoting Women in Trucking Workforce Act was introduced last November by Senators Jerry Moran and Tammy Baldwin, directing the FMCSA to create an advisory board for women in the trucking industry. The committee would be tasked with identifying ways companies could support women pursuing careers in trucking and connecting them to opportunities exclusive to them, like enhanced training, education, and outreach programs.

With the emergence of this act, and the buzz around women in trucking these past few years, taking a thoughtful look on ways companies can support female truck drivers can prove beneficial in helping create an inclusive, diverse trucking force that can keep up with this new decade.

The gender pay gap — where the trucking industry falls

According to the Women in Trucking Association, female truck drivers tend to be paid fairly. Founder Ellen Voie recently stated, “A carrier sets the pay based on mileage, hours, or percentage of the load. It is not related to age, ethnicity, or gender.”

With many industries struggling to make sense of and deal with the gender pay gap, this pay equality amongst men and women is a major plus — especially given the trucking workforce is still heavily dominated by men.

While pay is generally fair, Voie echoes that there are still significant issues female truckers face — and those issues come directly from their male counterparts. Voie says, “When a female professional driver pulls into a loading dock, she’s often met with skepticism from the men around her, who watch her as she backs the rig.”

The image this scenario concocts is not a hopeful one. Continuously having to prove yourself under the watchful gazes of those who should be your peers can feel incredibly draining — especially on a day-to-day basis.

What the future of trucking for women looks like

The percentage of female truck drivers rose from 4.9 to 6.2 from 2008 to 2017 — a slow but promising progression. Given that vital decision-makers and organizations are working to advocate on behalf of female truck drivers, scenarios currently plaguing the everyday lives of female drivers are likely to improve in the future. With those improvements can come the expansion of a diversified and more welcoming workforce.

Read our blog post from International Women’s Day 2019 to learn more about how we’ve worked with the Women in Trucking Association to provide education and resources that promote inclusivity.