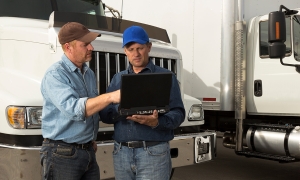 Regular readers of my blog posts are familiar with what I’ve called the “unacceptable increase” in truck-involved crashes resulting in injuries and fatalities.

The 2006 (6) large truck causation study by the FMCSA showed that in 88% of fatal and injury crashes, driver factors such as driving too fast for the conditions, illegal maneuvers, illegal drug use, lack of familiarity with the road, and driver fatigue all played a significant role.

A more recent study, Predicting Truck Crash Involvement (2022 Update) by ATRI (American Transportation Research Institute), looked at driver behavior as a predictor of crashes rather than a causation. If you could identify the drivers who exhibited the predictors, you could take pre-emptive action.

The report identified a database of 583,805 unique drivers: those who had undergone inspection during a specific three-month period (Jan, Feb, and March of 2019), as noted by MCMIS (Motor Carrier Management Information System). Information on inspection violations, either vehicle or moving violations, convictions, and crash history was gathered from both MCMIS and CDLIS (Commercial Driver’s License Information System) data. I know many of you would agree that MCMIS data is untimely, inaccurate, and inconsistent. I wouldn’t disagree with those who see it that way, but it’s consistently inconsistent and the best database available.

Of that 6.6%, 34,000 drivers had one crash; 1,881 had two, and only 81 drivers had three crashes. Six drivers had four crashes each, and last place was tied: two drivers with five crashes each. One can imagine learning a lot from just those last 89 drivers. But let’s take a look at the bigger picture.

What the Inspections Found

It’s always interesting to note what inspectors find during truck inspections, and here, the drivers performed better than the trucks. Violations included 291,000 for lighting, 250,000 for other vehicle defects, and 238,000 for brakes and other problems. Driver violations included Hours of Service (116,000) and speeding (51,000), plus size and weight, log book, and other issues. In all, the study incorporated more than 1.69 million violations among the 585,000 drivers.

The study found four specific violations, convictions, or historical occurrences that each raised the likelihood of a crash by over 100%:

These convictions predicted an increased crash likelihood of 50% - 100%

Intervening Before There’s a Problem

Interesting statistics. But, as I like to say, so what and then what? Now that we have statistics on crash predictors, what do we do with them? How do we use them preemptively to reduce the frequency of truck crashes and the injuries, deaths, and costs they incur?

New technology has provided some excellent tools to objectively observe and evaluate fleet drivers with greater accuracy and detail than previously possible. Video technology, available inside the cab, road-facing, and multi-directional, can observe any number of risky driving actions, from distracted driving to tailgating, and then alert the driver and note the event. Fleet telematics registers driving patterns for signs of aggressive or reckless driving, such as speeding, hard braking, or fast accelerations. Either system is helpful; used in conjunction, the driver insights they provide can be extremely accurate and actionable.

Get to the Behavior’s Root Cause

You can’t fix a behavioral problem with training or a training problem with a behavioral approach. Successful interventions need to address the correct root cause, and here I find that the 80/20 rule generally prevails: 80% of crashes are due to behavior. About 20% are a skill or knowledge deficit. To get to the root cause, I often apply what I call the Five Why’s methodology. Here’s an example of the Five Why’s:

Interventions to Preclude a Recurrence:

The texting was basically poor decision making all around. But even excellent drivers may have developed certain habits they are unaware of and even defensive about because they may not see things in context.

For example, I was involved in an accelerometer test, and we needed to calibrate truck standards for acceleration, hard braking, etc. I took our five best drivers, all million-milers, and put sensors on their trucks to monitor performance and establish the baseline. When it came to hard braking, one driver was noticeably over-represented, and yes, he was very defensive when I mentioned it. I responded by laying out the metrics of all five drivers, so he could objectively see what the difference was. He never said I was right, but he didn’t have to. By the next week, his performance was right in line with everyone else's because he had awareness and objective context.

We seek out the root cause because root causes are actionable. You can effectively address predictors before they become incidents.

With the million-mile hard-braker, I didn’t lecture or reprimand or judge; I provided objective context. For the texting dispatcher and driver, it was a case of reinforcing expectations. And if it’s really a training or skills issue, then it’s a training solution.

Here is what I think is the best way to apply the Crash Predictors to reduce the likelihood of crashes:

And do everything within a culture of safety.

“Nothing we do is worth harming ourselves or others” is an adage from early in my career that still holds sway. It says that safety is a core value, a part of the culture. Any efforts to improve safety will be much more successful within a culture that prioritizes safety at all points and all levels, including and especially from leadership. Within such a culture, all safety initiatives will have the greatest chance of success.