Definition: The action or practice of illegally transporting people from one country or area to another, typically for the purposes of forced labor or sexual exploitation.

On January 30, Omnitracs welcomed Truckers Against Trafficking and Red Hat for our own Human Trafficking Awareness Day, which was held at Pacific Plaza Park in Downtown Dallas. The event was created by Advocates for Women in Technology — our women’s employee resource community — with a goal to raise awareness in the community and educate attendees on what they can do to combat human trafficking.

The U.S. was ranked one of the world’s worst places for human trafficking in 2018. Here are some recent and shocking statistics:

Our commitment to human trafficking awareness 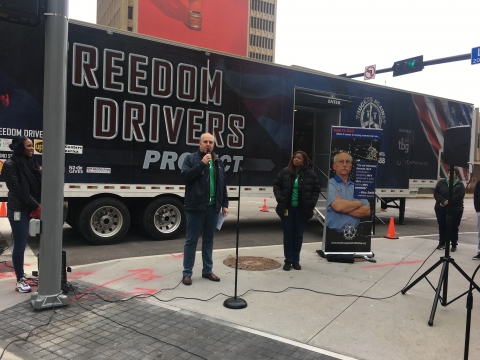 Omnitracs CEO Ray Greer kicked off the event with an impassioned speech on the egregiousness of human trafficking. Greer had this to say on the commitment and responsibility Omnitracs feels toward this human rights issue:

“We have technology and all of these trackers around the country. We have the opportunity to use our technology to increase awareness and understanding and to take action when a driver pulls into a truck stop, a fueling station, or a rest stop and they witness something that they know is wrong.”

How one trucker saved a woman’s life

When truck driver Kevin Kimmel stopped his truck outside of a station in Richmond, VA, he noticed suspicious activity around an RV. When he saw a young, malnourished-looking woman stick her head outside of the RV and have it immediately yanked back inside, he made a phone call to law enforcement. When officers arrived and questioned the woman, she immediately began to weep and begged not to be let back inside the vehicle. The 20-year-old woman had been trafficked, held against her will, and physically and sexually abused.The traffickers threatened to kill and injure her family, and she could not remember the last time she had been given something to eat or drink.

Thanks to Kimmel’s one phone call, the woman was saved from her two traffickers, who are now in prison with 40+ year sentences.

Concluding the story, Van Dam affirmed, “The trucking industry through their sheer numbers, extensive travel, and nature of their jobs can provide an extra set of eyes and ears to assist law enforcement in the recovery of victims and arrest of traffickers and buyers.”

Red Hat partners with Omnitracs for innovation that gives back

The event also had a Red Hat mobile truck that hosted Omnitracs software engineers who volunteered their time to participate in a codefest in order to improve the user experience of the Truckers Against Trafficking mobile app.

The engineers spent time modernizing the mobile app’s simple architecture to allow for much easier maintenance of the code in order to deploy to a high-performing, scalable platform. This will allow for enhanced data that the organization can use to further their efforts combatting trafficking.

Omnitracs is a proud partner of Truckers Against Trafficking and Red Hat. We want you to join the fight against human trafficking! Here’s what you can do.