A record number of us are clicking it, and it’s paying off 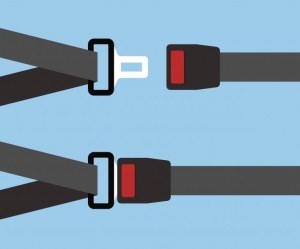 Seat belt use in America in 2016 — the last year for which full numbers are available — reached an unprecedented high, 90.1 percent. Clearly, efforts aimed at increasing driver compliance with seatbelt laws and reducing the number of deaths and serious injuries as the result of vehicular crashes have paid off beyond anyone’s reasonable expectations.

Yet, beginning May 14 and running through June 3, state troopers and local police in all 50 states will be out in force looking for drivers — and passengers — who still aren’t buckling up so that they can pull those vehicles over and issue some very expensive tickets. They’ll just be taking part in the 16th annual Click It or Ticket safety belt awareness and compliance campaign.

Those officers are just bold enough to believe that they can push seat belt compliance even higher — and save more lives in the process.

Though their primary target will be passenger vehicles with unbuckled occupants, they’ll also be peering closely into truck cabs to see if commercial drivers are obeying the seatbelt law as well. And for commercial drivers, the stakes, if anything, are higher. Not only are their lives at risk if they’re not buckled into their seats, their continued ability to earn a living behind the wheel could be temporarily or even permanently forfeited if they get ticketed for failing to comply with the seat belt law.

Risk by the numbers

Still, nearly 10 percent of all drivers and/or their passengers fail to heed the warnings. The numbers illustrate just how foolhardy that is:

Trucker drivers should lead by example

So, how can professional drivers help the cause behind the Click It or Ticket campaign?

For starters, they can make sure they always use their seat belts, even when riding as a passenger. Beyond that, they can encourage co-workers and other drivers they meet along the highways to do that same.

Trucking companies, too, can play an important role in increasing seat belt compliance by:

Such efforts actually work. In 2016, the use of seat belts in passenger vehicles saved an estimated 14,668 lives of vehicle occupants ages five and older. And the Click It or Ticket campaign justifiably can claim at least some of the credit for that.

So, over the next couple of weeks, as commercial drivers see the Click It or Ticket advisories on electronic highway signs or on bill boards, as they see officers on the side of the road writing tickets (perhaps for seatbelt violations), and as they interact with other drivers, they can make a special effort to communicate their approval of seatbelt law compliance. Whether it’s with a couple of short horn blasts as you pass an officer issuing a ticket or a simple word of encouragement to another driver over a cup of coffee, individual drivers can participate in the campaign. And they can make a difference.