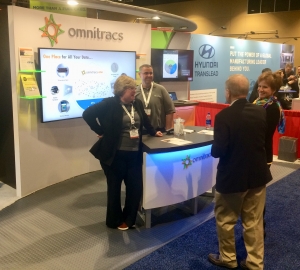 The Truckload Carrier’s Association (TCA) — which Omnitracs has been a proud member of for 31 years — hosted their 82nd Annual Convention from March 1 – March 3 in Kissimmee, Florida. Founded in 1938, the TCA is the only national trade association with a sole focus on truckloads in the motor carrier industry.

We were joined by nearly 150 customer attendees, and our presence at the conference focused on highlighting key functionalities in Omnitracs One and Omnitracs Drive. We are also a proud member of the Allied Committee for the Trucking Industry, who generously hosted the closing reception and banquet dinner on March 3.

The Federal Motor Carrier Safety Administration (FMCSA) was well represented at the event, and they kicked off March 1 with essential discussions on regulatory and highway topics during the Regulatory Committee meeting. FMCSA Chief Safety Officer and Assistant Administrator Jack Van Steenburg led a discussion focused on the current regulatory landscape.

During his discussion of the Drug and Alcohol Clearinghouse, he touched on the need to educate drivers on risks associated with the use of Cannabidiol (CBD) oils. CBD is the second most prevalent of the active ingredients of cannabis, and its exact legal status is still in flux. The U.S. Food and Drug Administration does not currently regulate these substances, and this could result in a driver testing positive for a banned substance during a required drug test.

Following these discussions, committee members moved to discuss trucking-aligned groups rallying opposition to a proposal that would tax the number of miles driven by commercial truck drivers in order to pay for a five-year, $287 billion highway bill. This morning, Chairman of the Senate Finance Committee Chuck Grassley ruled out the truck tax proposal — a likely reflection of the advocay efforts of trucking groups.

On Monday, March 2, the General Session kicked off with a rendition of the Star Spangled Banner and O’ Canada — a marking of the strong alliance between U.S. and Canadian trucking industries. Following the performances, TCA Chairman Josh Kaburick kicked off the conference and introduced keynote speaker and baseball Hall of Famer, Carl Ripken Jr., who shared lessons on the importance of perseverance.

On Tuesday, March 3, FMCSA Acting Administrator Jim Mullens advised the General Session audience that the FMCSA has finalized their review of the proposed Flexible Hours of Service rule, which is now with the Office of Management and Budget. Mullens expressed that there is currently no known timeline for the review of the proposed rule, but that this is a normal, progressive step in the rulemaking process.

The rest of the conference focused on recognizing pioneers in the industry, along with conversations on key topics, including women in transportation, security logistics, telematics, and the driver experience.

We look forward to attending next year’s TCA convention, and we want to give a special thank you to all our dedicated customers who attended! In the meantime, check out these key takeaways from our Outlook 2020 conference.