A Fourth of July Tribute to Trucking and Our Military 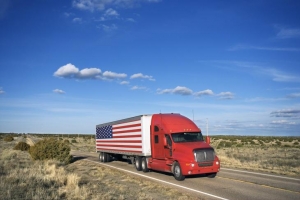 Truckers’ support for the nation, the military, the flag and other symbols of America is so widely recognized that it long has been a cliché for Hollywood and Nashville to include visual and/or audio references to trucking in their works.

And as we approach the Independence Day holiday we should take notice of and honor both the unusually large percentage of trucking industry workers who are veterans, and the many, many other non-veterans who take pride in being part of the logistical spine of this great nation.

A preferred post-service career for veterans

Many soldiers, sailors, airmen and Marines learned how to drive, repair, or support big vehicles or to manage logistics while in the service. So, upon discharge, driving, fixing or supporting trucks — or managing logistics — are obvious paths of opportunity.

Many veterans also are drawn to driving and truck maintenance jobs because, well, they aren’t desk jobs. Obviously, you don’t have to be a veteran to prefer the physical freedom of working on the road, but the notion of being tied to a desk for hours each day frequently is a big turnoff for people emerging from military jobs.

The fact that truck drivers, in particular, get to spend their lives experiencing the many sights and wonders of America from their cabs also helps grow the great appreciation for country.

Ancient military greats like China’s Sun Tzu and Alexander the Great frequently spoke of managing logistics well as one of the biggest factors in military success. Alexander thought logistics were so critical to his success in battle that he famously said, “My logisticians are a humorless lot… they know if my campaign fails, they are the first ones I will slay.”

Gen. Dwight Eisenhower made a similar though less menacing point at the end of World War II in Europe. “You will not find it difficult to prove that battles, campaigns, and even wars have been won or lost primarily because of logistics,” he said.

He, like so many military professionals, understood the importance of transportation infrastructure and logistics capabilities; and not only for conducting war but also for nation-building. But it was only at the end of the war that Eisenhower became aware of the potential contained within a well-planned system of freeways. While U.S. and Allied supply operations performed superbly during the war, they were constantly having to overcome the narrow, crooked and poorly maintained roads in Italy and France. Then, once the Allies moved into Germany as the war wound to its end, Ike saw and became envious of the Reichsautobahn system of high speed freeways that the Nazis had built (but never fully utilized) to keep their armies in the field well-stocked. That understanding helped power his push to build our Interstates.

Military parallels with the trucking industry

Whether they’re assigned to a big ship, a small infantry platoon, or a sophisticated air wing, military veterans learn to blend two seemingly opposed ideas into their work. They must learn to work as a team in which every member must contribute his or her best for the unit to succeed. And they must learn independent thought and take action when circumstances require. Indeed, the ability of our troops to exercise initiative and to fight both as a group and independently has been hailed by military historians as the key to the U.S. military’s status as the one of the finest in history.

Indeed, that combination of teamwork and independence has become recognized almost universally as a uniquely American characteristic, in or outside the military.

That same combination of traits is highly sought after among commercial truck drivers as well as others who work in the trucking industry.  No one driver can get the job done without others maintaining trucks, planning loads and routes, loading and unloading cargo, marketing the service and managing the business side. But no trucking outfit will survive long without drivers willing to take charge and make good decisions on the fly when circumstances on the road demand it, or when unexpected events cause disruptions.

So it makes sense — from the numbers we do have and those we can only assume, from the skill sets, career and life backgrounds of today’s trucking employees, and from the character traits and work preferences found among so many in the industry — that the trucking business would be the most patriotic industry in the nation.

And that’s a good reason for us now to salute, and to say “Thank You” to the 8.7 million people in the American trucking industry, not only for what some of you did in defense of our nation but also for what all of you do for the rest of us every day. Happy Birthday, America! And Happy Independence Day to the wonderful people who love America and who help every day to make it a great place.